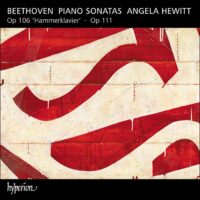 This is the final CD in Angela Hewitt’s complete cycle of the 32 Piano Sonatas of Beethoven. Both the sonatas recorded here are recent additions to her repertoire, and the results amply justify the patience and wisdom of her approach. A fitting end to a magnificent Beethoven sonata cycle.
read more » 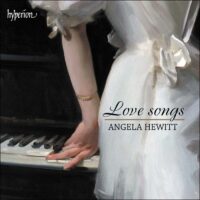 Angela Hewitt’s new album is clearly destined to become a favourite. Some of the best-known musical declarations of love across the centuries, heard in transcriptions by some of the great pianists (including Angela herself), this album is simply exquisite and not to be missed. 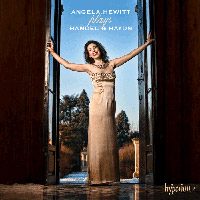 Recorded and released in the ‘anniversary year’ of both Handel and Haydn, this CD is an effusive celebration of the two composers, performed by an artist whose renditions of 17th- and 18th-century keyboard works on the piano have received the highest possible acclaim. 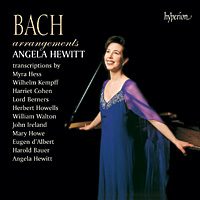 A choice selection of Bach Arrangements by Wilhelm Kempff, Myra Hess, Eugen d’Albert, and many others, including Angela Hewitt herself.

‘A magnificent addition to both the Bach repertoire and Angela Hewitt’s artistically unparallelled survey of Bach’s keyboard compositions’ (Fanfare, USA) 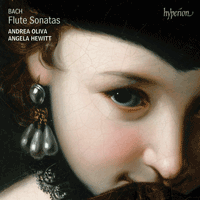 Fans of Angela Hewitt will be delighted to find her in chamber mode, accompanying Andrea Oliva (described as ‘one of the best flutists of his generation, a shining star in the world of the flute’ by Sir James Galway) in a programme of J S Bach’s flute sonatas (including one by his most famous and talented son, CPE). Of unfailingly remarkable quality, all these works exploit the full potential of an instrument which was only just coming into its own when they were written. Oliva’s lyricism and agility coupled with Hewitt’s musicianship—not to mention her lifelong rapport with Bach’s music—make this an album to treasure. 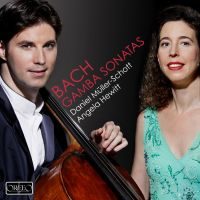 Angela Hewitt’s first chamber music CD is with the brilliant young German cellist, Daniel Müller-Schott. Both artists were brought up on the music of Bach, and their collaboration in these wonderful sonatas is a joy to hear.
read more » 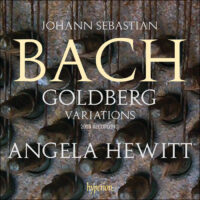 Sixteen years have passed since Angela Hewitt’s first, justly celebrated, version of the ‘Goldbergs’. She here commits to record her ever-evolving response to a work which contains the ‘shadowed lesson of the whole world’, and which continues to play a central role in her life as an artist.

‘The pianist’s enviable polyphonic acumen and dance-orientated conception continue to operate at full capacity, albeit on a deeper and subtler level, as comparative listening reveals’ (Gramophone)
read more » 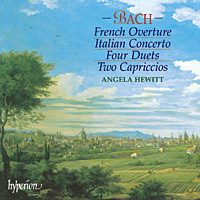 One of Bach’s most popular works, the Italian Concerto, is here presented with the French Overture, the Four Duets, and the two youthful Capriccios.

‘This disc is one of the finest volumes in Hewitt’s continuing Bach cycle, with marvellous engineering to match. Highly recommended’ (International Record Review)

‘Hewitt’s playing radiates joy, wit and profound understanding of the composer’s keyboard style. This series is one of the record glories of our age’ (The Sunday Times) 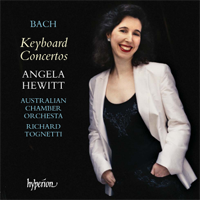 This is a re-issue in slimline double format of the two Bach Keyboard Concertos CDs that were released separately to begin with. Only a few weeks after their release, they were already in the Billboard Charts in the USA, and were named Record of the Month by Gramophone magazine. For those of you who haven’t already purchased the single discs, this is the best format to have! 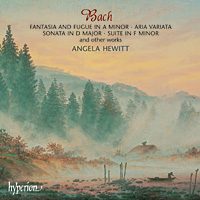 The last disc in the acclaimed series of solo keyboard works by J.S. Bach has Angela Hewitt presenting many works which are rarely played, let alone on the piano. Besides more well-known pieces such as the Fantasia and Fugue in a minor, BWV 904, and the Aria Variata, BWV 989, we have the Sonata in D major (concluding with a fugue imitating the hen and the cuckoo!), and the Partie in A major (with its jaunty Air pour les Trompettes).

“…another out and out winner from Angela Hewitt” (The Daily Telegraph, London)

‘The statuesque, beautiful, and brilliantly gifted Angela Hewitt has now joined the ranks of the great interpreters of Bach’s keyboard music, and
the effortless and natural readings on this and the other CDs in her cycle for Hyperion unquestionably number among the finest available. After discussion, debate – call it what you will – Angela Hewitt’s recordings may be deemed unquestionably definitive’
(Fanfare, USA)
read more » 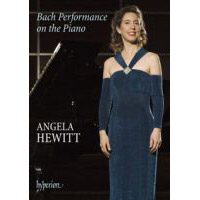 Angela Hewitt shares the inspiration and experience behind her award-winning playing in an illustrated lecture that explains the technical and practical steps essential for performing Bach on the piano. For the first time she appears on a 2-DVD set, launched in conjuntion with her Bach World Tour which took her to all corners of the globe during the 2007-2008 concert season. In the first disc, she conducts a ‘masterclass’, discussing all the challenges, possible pitfalls and delights in performing Bach on the piano. The second disc features Hewitt live in concert. This is an unmissable release.

“Angela Hewitt’s comprehensive lecture to the camera is addressed to a very wide spectrum of potentially interested people, ranging from music lovers through teachers, amateur pianists, more accomplished ones who have not yet played Bach, to full professionals, even those who have played his music in public.” (International Record Review)
read more » 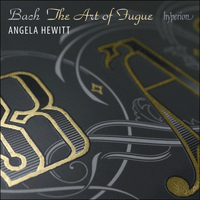 ‘Hewitt’s eloquent exposition of each fugue’s “formula”, the result of a lifetime’s immersion in Bach’s music, could hardly be bettered’ (Financial Times)

Angela’s much-awaited recording of Bach’s ultimate masterpiece, The Art of Fugue, is destined to be the crowning achievement of her Bach cycle for Hyperion (…) With decades of experience behind her, she breathes fresh air into the most complex keyboard-writing of Bach, bringing it to life with crystalline clarity and thoughtful sincerity. 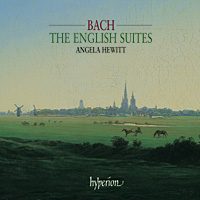 JOHANN SEBASTIAN BACH (1685-1750) Hyperion Records CDA 67451/2 Recorded towards the end of Angela Hewitt’s Bach cycle, the English Suites are large-scale, virtuoso works demanding a complete mastery of Baroque style and technique. Another tour de force from this wonderful player’ (The Independent) ‘The standard of excellence Angela Hewitt has set in previous instalments in […]
read more »