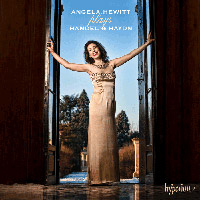 Recorded and released in the ‘anniversary year’ of both Handel and Haydn, this CD is an effusive celebration of the two composers, performed by an artist whose renditions of 17th- and 18th-century keyboard works on the piano have received the highest possible acclaim.

Recorded and released in the ‘anniversary year’ of both Handel and Haydn, this CD is an effusive celebration of the two composers, performed by an artist whose renditions of 17th- and 18th-century keyboard works on the piano have received the highest possible acclaim.
This recital is a welcome gesture from the ‘high priestess of Bach’ (The Sunday Times). As you will hear, Hewitt’s trademark clarity of line, singing tone and instinctive musicality are perfectly suited to the urbane elegance of the works recorded here.

In a fascinating and personal booklet note, Angela Hewitt takes the listener through her own childhood experiences of the works of Handel and Haydn that led her to select the works for this disc, and includes an interesting discussion of historical performance practice. This is an enchanting release that will delight Angela’s legion of fans.

‘Hewitt distils the essence of the original instruments without compromsing her out-and-out commitment to the modern keyboard … The large-scale Haydn E flat Sonata is superb, above all the middle movement in an astonishing and other-wordly E major. Hewitt’s dynamic range is bold … and the glittering facility of the final Presto is thrilling. Altogether a splendid contribution to these composers’ anniversary year’ (BBC Music Magazine)

‘What intrigues me most bout Angela Hewitt’s playing is the tension between the expressive restrictions by her 18th-century repertoire, and the imagination she deploys so fully within its boundaries… she takes pains to make each strand of the music apparent to the listener… technical virtuosity put to the service of Haydn’s brilliant wit’ (Fanfare, USA)

‘Everything emerges with an impressive combination of clarity and vitality … The programme is unique to the current catalogue, and Hewitt’s favoured Fazioli instrument has been recorded with superb fidelity’ (International Record Review)

‘Canadian pianist Angela Hewitt, famous for playing Bach, commands the very different, more Italianate style of Handel. The last work on the disc is Haydn’s great E flat sonata and I like Hewitt’s way with its Adagio best of all’ (Daily Mail)