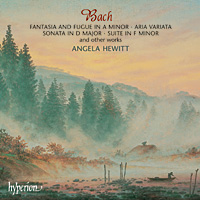 The last disc in the acclaimed series of solo keyboard works by J.S. Bach has Angela Hewitt presenting many works which are rarely played, let alone on the piano. Besides more well-known pieces such as the Fantasia and Fugue in a minor, BWV 904, and the Aria Variata, BWV 989, we have the Sonata in D major (concluding with a fugue imitating the hen and the cuckoo!), and the Partie in A major (with its jaunty Air pour les Trompettes).

“…another out and out winner from Angela Hewitt” (The Daily Telegraph, London)

‘The statuesque, beautiful, and brilliantly gifted Angela Hewitt has now joined the ranks of the great interpreters of Bach’s keyboard music, and
the effortless and natural readings on this and the other CDs in her cycle for Hyperion unquestionably number among the finest available. After discussion, debate – call it what you will – Angela Hewitt’s recordings may be deemed unquestionably definitive’
(Fanfare, USA)

A range of genres are represented here–fugues, chorale preludes, suites, a sonata, a set of variations–all from different periods of Bach’s life–displaying a variety of form, influence, and scope. This is music that has been neglected largely because it doesn’t sit within the famous Bach canons, rather than for any other reason.

Angela Hewitt brings her customary style and elegance to these works, and her vivid, joyous music-making creates a fitting conclusion to this benchmark modern survey of Bach’s solo keyboard works.

Buy this record at Hyperion: http://www.hyperion-records.co.uk/details/67499.asp

Sleeve notes
CD OF THE WEEK, THE DAILY TELEGRAPH

‘Here is another out and out winner from Angela Hewitt … The hallmark of her playing derives from just such a sharp definition of musical character. Be it light or solemn, her outlook on Bach is consistently enlivening’ (The Daily Telegraph)
‘Hewitt plays all of this unfamiliar material with her usual flair and beguiling sound’ (Sunday Times)

‘when Hewitt’s technical refinement merges with the spirit as well as the letter of the music, miracles happen’ (BBC Music Magazine)

‘This disc makes a piquant, unexpected conclusion to Hewitt’s Bach cycle. Her many admirers will want to acquire it’ (International Record Review)

‘a series of performances where freedom over articulation, phrasing, embellishment, dynamics and tempo is governed by an artistic sense of responsibility; and the whole recital is heard in a shrewdly balanced recording of fine tonal verisimilitude’ (Gramophone)

‘Hewitt has already exhausted the supply of critical superlatives in her devotion to Bach. Those who have loyally followed the Hyperion cycle will find that this terminal issue meets and exceeds the stringent standards which she set for herself. Hewitt presents a Bach of sensitivity and integrity for our time and always. Enjoyment of the disc is enhanced by the performer’s lively and informative booklet note. Conventional CD sound quality is in the demonstration class. SACD playback (stereo is preferable to multi-channel) is as close as most of us will ever get to having Miss Hewitt and her concert Steinway perform in our listening rooms’ (‘La Scena Musicale’ Quebec)


Reviews of this record