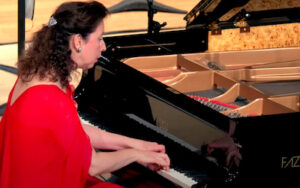 It is now eight months since that first lockdown in March of this year. I don’t think any of us imagined then that we would still be in a terrible predicament with cases on the rise again all these months later.

Since I last wrote, at the end of July I went to the Fazioli factory near Venice and chose a new concert grand from five that were waiting for me. My new “best friend” is a fabulous instrument and you will be able to hear it the day after tomorrow (and for a few months after that) when I perform Bach’s Goldberg Variations from in front of Bach’s grave at the Thomaskirche in Leipzig. It will be streamed live on ARTE CONCERT. Don’t miss it! After the performance, I will finally be presented with the City of Leipzig Bach Medal. It was to have been a grand occasion last June, but the honour is still huge and I know I will be very moved.

It seems that almost every “concert” now is without an audience but streamed live to the world on the internet. I did actually manage to finish my Bach Odyssey in London’s Wigmore Hall in September, and we had an audience of 50 or so inside the hall—before live audiences were banned once more. Those streams are now over with, but there are several you can still catch.

Even though it’s not the same without a live audience, it’s still great to work with my musician colleagues and to make music together. We need to keep going as much as possible!

Before the end of November, I will be recording two new CDs for Hyperion Records, including the last album in my complete cycle of Beethoven Sonatas (Op. 106 and Op. 111). We’ll be doing that in Germany on my new Fazioli. Something to look forward to!

Concerts are still being cancelled, however (most recently Prague in December). We live from day to day. At least there seems now some hope at the end of the tunnel.