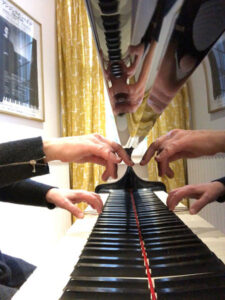 It’s been eleven weeks now since I’ve been in lockdown in my London flat. Two months since I last posted a news item here. A different experience. But touring concert pianists are used to being alone, and fortunately I’m happy in my own company.

I’ve been busy. So far I’ve posted 60 short pieces on Twitter and Facebook (now also on my Youtube channel here) for the world to enjoy. The Youtube channel is called “Masterclasses” because that’s indeed what they are–most of them are pieces that piano teachers use all the time with their students, and I hope they will be helpful and inspiring. The comments certainly have been heart-warming and brought me the courage to go on.

It’s also a great time to be learning new repertoire, so I’m well into the final Beethoven Sonata that I have left to learn–the huge “Hammerklavier”, Op. 106. I need many more months for that! Plus a lot of other stuff that will also serve for future recording sessions. Those will no doubt return to the realm of possibility before public concerts.

Though I’m giving one of those, but without an audience: on June 25th at London’s Wigmore Hall I will play an hour of Bach for the world over the internet, live on BBC Radio 3 and in HD video on Wigmore’s website. You can read the details here. That will be something.

Unfortunately because of the UK’s quarantine law, I cannot perform in Germany mid-June as planned, because then I wouldn’t be able to do the Wigmore (upon return to the UK, you have to self-isolate for 14 days). A shame, as I love playing in Germany, but hopefully it will come back before too long.

From June 3rd at 7 pm, you can watch a performance I gave last December in London’s King’s Place concert hall with the Aurora Orchestra. Together we perform one of Mozart’s greatest Piano Concertos, the K. 482 in E-flat major. How strange it is to see myself all dressed up in one of my red outfits. They’ve been languishing in the cupboard now for a while…

Other than that, I’m cooking, cleaning, shopping, doing other video clip requests, doing accounts–there’s never a dull moment. After decades of touring around, it’s not that bad to have time at home.

Please still stay at home as much as possible and stay well.