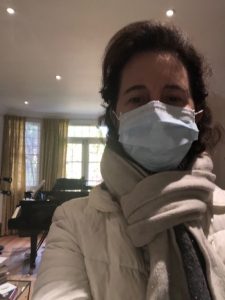 How the world has changed since I wrote my last post at the turn of the year.

With the virus pandemic now overtaking all of normal life, I find myself in lockdown in my London flat, where already for two weeks I’ve seen nobody other than the cashiers in the supermarket around the corner. At least here I have my Fazioli F183 (not a concert model—smaller, but still a wonderful instrument and my companion in this flat since 1999); all my professional possessions like scores, books, tax papers; and endless things to keep me occupied. What a disaster for the world, this corona virus. When I read the first article about it back in January, I immediately didn’t like the sound of it at all. Now here we are—most of the world locked down, and Italy especially suffering horrifically—with worse to come for many countries, and no end in sight.

Before this happened, there was the story of my beloved concert grand Fazioli piano being dropped by movers in Berlin and coming to an untimely end. That unfortunate story, as soon as I put it on Facebook, went completely viral, with every newspaper in the world picking it up, every radio station, talk shows, CNN, New York Times, Washington Post, on the screens in the Berlin subway, the Guardian having it as the most read story after Coronavirus. I never expected such a reaction. I had three incredibly nightmarish days, fending off the world press as I really didn’t want to talk about this any more than I had—and especially while the insurance saga still had to be gone through. That is ongoing, but looking very positive. Of course it was completely devastating to lose an instrument I loved so much, and on which I had made all my recordings since October 2003 (with the exception of two that were done outside of Europe). I still can’t quite believe it’s gone (well, it’s still on the floor of the Fazioli factory in Italy—which anyway is closed at the moment). At some point of course I will choose another, and Mr. Fazioli is still making stunning pianos, so I’m sure I’ll find something I can once more make my own. Enough about that.

After doing that Beethoven Variations recording (for which I just wrote the liner notes), I spent a lot of February preparing the Bach Odyssey XI programme which I managed to play several times on tour in Canada and the United States before the world got shut down. Fortunately I got back to London just in time, before travel restrictions were set in place. But now of course the schedule is pretty empty. I am, nevertheless, working hard on the Art of Fugue—the twelfth and final programme in my 4-year Bach Odyssey. At some point life will begin again, and I plan to be ready for it. I wrote last time that I was taking a mini-sabbatical this year from July to November. Well, that just got put forward to now, and if some concerts can be rescheduled to the fall, then at least I have several free months in which to do them.

While I’m stuck here in my small apartment, I’m posting some daily videos of short pieces of Bach and other composers on Twitter and Facebook, so please join me there if you can.

Please stay indoors and don’t go out unless you absolutely have to. It’s very important we all play our part in trying to stop the spread of this unknown virus. Stay well and keep listening to music! Love to all at this difficult time.