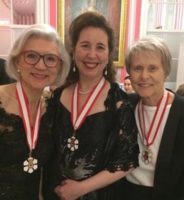 I’ve been trying for months to post another news item, but something else always gets in the way. My Facebook and Twitter pages get priority—so I apologize to those of you who are not on social media! It’s hard to do it all.

This is my busiest time of year because of the annual Trasimeno Music Festival which begins in two weeks time (HELP!). It’s always such a highlight of my year, but takes tremendous work, not just at the piano to prepare the seven different programmes I’m playing in seven days, but all the administration as well. We are a small but efficient team running the whole show. I hope many of you will still come and attend these marvellous concerts in stunning venues. Opening night is in the Basilica of St. Francis in Assisi with Rossini’s Petite Messe Solennelle. Listening and playing this piece while surrounded by the marvellous frescoes of Giotto will be unique. Go here to see the entire programme and to book your tickets! You won’t regret it.

Last night I performed my Bach Odyssey IX recital at London’s Wigmore Hall (the first three English Suites plus other works). A year from now we will have reached the end of that four-year journey. Still three more mammoth programmes left! But to play such great music as I did last night and to share it with people around the world—this is wonderful. Bach never ceases to amaze me with his energy, inspiration, perfection, and heart.

Last month I was made a Companion of the Order of Canada by Governor-General Julie Payette. It was the first time in Canadian history that all three Companions were women: I was honoured to be there along with Beverley McLachlin (Chief Justice of Canada for 17 years), and astronaut/neurologist Rebecca Bondar (see photo). Only 165 living Canadians at any one time are allowed to be Companions. Thank you, Canada!

After Trasimeno this summer, don’t miss my recitals in Canada (Toronto, Ottawa, Gananoque) and especially my only appearance this year of the complete Well-Tempered Clavier at the Edinburgh International Festival on August 12th and 14th in the beautiful Usher Hall. For more information, go here.

Now I must fly to Amsterdam to rehearse with members of the Concertgebouw Orchestra ahead of Trasimeno. Never a dull moment!