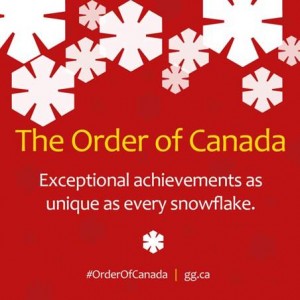 Some news that I should share on New Year’s Eve: the Governor-General of Canada has announced new members to the Order of Canada, and I have been “promoted” to a Companion – the highest honour Canada can bestow on one of its citizens. I feel deep gratitude to the country which I still call “home”, which gave me such a great beginning in life, which has not forgotten me even though I spend much time away from it, where I still maintain a home and where I have so many wonderful friends and fans. And whose accent I retain, despite having lived in the UK for over 30 years!! Nothing would change that. Many wonderful Canadians, including a Nobel Prize winner, have been celebrated today in this way. And this list of Companions shows what Canada can be proud of. I should also mention that to receive this honour at a time when Canada has a new government warms my heart. Thank you, Canada! A very Happy New Year to you all!