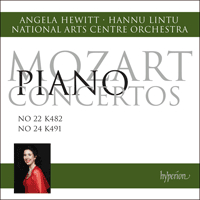 Last week my third album of Mozart Piano Concertos for Hyperion received a JUNO award in Canada. I suppose it’s like Canada’s Grammies. The recording of Concertos Nos. 22 (K482) and 24 (K491) was done in the summer of 2013 with the National Arts Centre Orchestra in Ottawa and Finnish conductor Hannu Lintu. We were up against stiff competition from many wonderful Canadian musicians, so it’s nice that the album was recognised in this way. I’m particularly happy for the musicians of the orchestra who played so well and gave their very best. Hannu also did a brilliant job whipping it all into shape. Thanks must also go to my record producer, Ludger Boeckenhoff. It’s my fourth JUNO, but my first one for a recording with orchestra. Let’s hope it means we can do another in the near future!