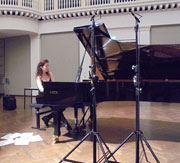 February was so busy, I didn’t have time to write another news entry. The most exciting thing was the recording of 16 Scarlatti Sonatas for Hyperion Records. That we did in the Beethovensaal in Hannover (see photo), where I made my first Bach recordings for Hyperion over 20 years ago. It brought back many happy memories. With just the right amount of “acoustic” it was the perfect place to record that repertoire. My team of two (Ludger Boeckenhoff, producer, and Gerd Finkenstein, piano technician) did a fantastic job and I’m thrilled with the results. Hopefully it will be out by the end of the year. It all depends on when I can find time to write the notes—not an easy thing. Also on the recording front, my Liszt CD was chosen among the best of the month in Gramophone’s Editor’s Choice and was also in the UK chart upon its release. You can read Bryce Morrison’s review on the Press page. I also gave recitals in Trieste (a favourite place to go), Leeds (where I have a cousin—my father’s nephew… my father studied at Leeds Parish Church and it was very emotional to perform there), and Bath (the complete Art of Fugue in a morning concert). This past weekend I performed in two concerts with the Yomiuri Nippon Symphony Orchestra from Japan, on tour in Utrecht and Brussels. Conductor Sylvain Cambreling did two very moving performances of Messiaen’s huge Turangalila Symphony. My colleague Cynthia Millar was expertly playing the ondes martenot. Today I feel as though I’ve been run over by a truck.

The yearly auction of the Canadian Friends of the Trasimeno Music Festival is on at the moment. If you would like a private lesson with me (something I never do), or would like a masterclass at your piano studio, school, or conservatory, have a look and place your bid! You can find the details here

There are still tour packages left for the Trasimeno Music Festival in Italy this coming July. Now is the time to book if you are thinking of coming to the entire festival! Some fantastic concerts are in store, and it’s always a highlight of my year to have so many friends and fans from around the world join me in beautiful Umbria. You can see the programme here

Now it’s Mozart in Oxford, but mostly learning a million new notes for concerts coming up in the coming months. Empty spaces in my calendar don’t mean I’m sunning myself on the beach. They mean long days spent practising with great concentration….