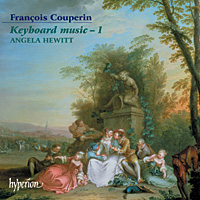 If Bach, why not also Couperin on the piano? Purists will be shocked, but Angela Hewitt makes an impressive case for it, and this disc became a bestseller!

‘By turning her attention to these works, Angela Hewitt may succeed in reviving and popularising Couperin’s enchanting music as no modern-day harpsichordist has been able to do’ (Gramophone)

‘Of all living pianists, Hewitt makes the strongest case for hearing Bach on the piano as opposed to harpsichord. Here, she applies the same staggering technique and intellectual grasp to three suites by François Couperin … outstanding’ (The Independent)

We are used to hearing the keyboard music of the great harpsichord masters Bach, Scarlatti, even Handel, played on the piano, but why not that of their contemporary, François Couperin ‘le Grand’? Putting this question to Angela Hewitt initiated appropriate investigation, with the result that she has now taken the jewelled miniatures of the French maître into her repertoire.
This is the first of three CDs devoted to the composer, and includes Ordres 6, 8 and 18 which contain several of his most well-known pieces: Sœur Monique, Le Tic-Toc-Choc, Les Baricades Mistérieuses and the famous Passacaille.

Buy this record at Hyperion: http://www.hyperion-records.co.uk/details/67440.asp

Sleeve notes
‘By turning her attention to these works, Angela Hewitt may succeed in reviving and popularising Couperin’s enchanting music as no modern-day harpsichordist has been able to do’ (Gramophone)
‘not only fabulously played, but also fine-tuned to the sparkle and finesse of Couperin’s world’ (Classic FM Magazine)

‘Of all living pianists, Hewitt makes the strongest case for hearing Bach on the piano as opposed to harpsichord. Here, she applies the same staggering technique and intellectual grasp to three suites by François Couperin … outstanding’ (The Independent)

‘Its virtues are those that distinguish her Bach: Clarity of line, delicacy of touch, a sense of rhythm that neither forgets nor overplays the importance of dance in baroque music’ (Independent on Sunday)

‘In all three of the Ordres here, Hewitt finds plenty of variety, and she is always punctilious in her observation of the nuances of Couperin’s ornamentation’ (The Guardian)

‘the point is of course whether the music is interpreted in a fresh, imaginative way, and that is always the case with Angela Hewitt … here Hewitt has a chance to be witty as well as formidably dextrous – a side to her that is rather attractive’ (Pianist)

‘Angela Hewitt shows that when properly used the piano can project Couperin’s thought with grace and accuracy. Her playing is vividly alive to detail and her choice of tempi is wholly convincing. She is finely recorded. Not to be missed’ (Musical Opinion)

‘Angela Hewitt’s initial foray into the 226 harpsichord pieces of François Couperin, short works that were originally published in 27 Ordres, so deeply appealed to me … poignant music and the superb performances … By instinct, inclination, and training, Angela Hewitt emerges as the perfect interpreter of the music of François Couperin’ (Ottawa Citizen, Canada)

‘particularly haunting, for along with her crisp technique, she adapts many of the expressive devices of the time to the piano’ (Turok’s Choice)


Reviews of this record

Please note: due to Covid-19 restrictions the online shop is limited to THREE items per customer per order. Dismiss

This site uses cookies. By closing this banner, scrolling this page, clicking a link or continuing to browse otherwise, you agree to their use. Find out more.