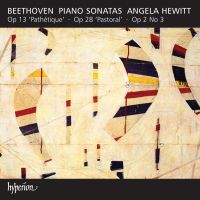 This is the second in a series of Beethoven CDs by Angela for Hyperion. The programme comprises three Sonatas which she has played in public for many years: the lyrical “Pastoral” Op. 28; the famous “Pathétique”; and the virtuoso C major Sonata Op. 2 No. 3–one of the highlights of early Beethoven.

‘Angela Hewitt is on characteristic top form in three of Beethoven’s iconic sonatas … Hewitt’s intelligent planning gives it [Pathétique] a hardcore makeover. The extremes of dynamic range are deftly realised, and she’s fearless at articulating with a brittle touch where necessary’ (Classic FM Magazine *****)

‘The Pastoral sonata leads off Angela Hewitt’s second Beethoven sonata cycle instalment, and she taps into the music’s overall geniality while also paying heed to its darker corners … I love Hewitt’s conversational give and take between the droning left-hand ostinato and the main theme at the Rondo finale’s outset … In addition to Hyperion’s superb sound, Hewitt, as usual, provides her own penetrating, vividly articulate annotations’ (Gramophone)

Angela Hewitt is widely acknowledged as one of the great pianists of the age. Gramophone Artist of the Year in 2006 and the recent subject of a week-long artist focus on BBC Radio 3, her frenetic concert schedule and expanding discography bear testimony to her extraordinary talent and energy.

Hewitt’s legion of fans will be delighted at this eagerly awaited second volume of Beethoven sonatas. Her first release in this series (see below) was fulsomely praised for its ‘clarity, intelligence and elegance’ … ‘fusing poetry and passion’, and all these trademark qualities of her playing are fully present in this second disc.

Angela presents three very different works here, written within a period of seven years: the enchanting ‘Pastoral’ Sonata Op 28, the monumental ‘Pathétique’ Op 13 and the dazzling early masterpiece Op 2 No 3. Her interpretations are vividly personal, yet the voice of the composer speaks clearly throughout.