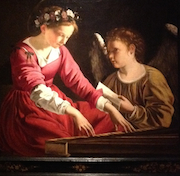 A very Happy New Year to you all! When I woke up this morning in Umbria, the hills were covered in snow! Bello! Soon I will be in Canada where the temperature is going to hit something like -26C. Winter has finally arrived!

After my recital in Antwerp, the last of 2014, I performed only at a private event in Spoleto before spending Christmas with friends in Umbria. It was good to have some days when I didn’t just practise and travel. We visited Orvieto for the first time. What a wonderful cathedral that is! We had a lovely afternoon in beautiful Perugia, visiting the Galleria Nazionale dell’Umbria which is a jewel (the photo is of Gentileschi’s Santa Cecilia). We drove around the lake and high up into the hills above it, seeing some breathtaking views. We also ate too much. Now for the diet…

This coming year, if all goes well, should be another memorable one. Highlights will include performances of three concertos new to my repertoire: Brahms D minor in Tokyo; Ravel Left Hand in Vancouver; and Falla’s Nights in the Gardens of Spain in both Vancouver and Hamburg. The time to learn those pieces is now, not 10 years from now! They have been lifelong dreams. I will be recording more CDs for Hyperion: Scarlatti in February and Beethoven in March. I will perform recitals in venues as diverse as the Dulwich Picture Gallery (the world’s first ever purpose-built art gallery), the stunning Wanamaker Playhouse at Shakespeare’s Globe in London, and the Capitol Theatre in Port Hope, Ontario. I will be in Japan, Brazil, Finland, Switzerland, Sweden, Turkey, Belgium, Norway, Holland, Italy, and of course Canada and the USA. My Trasimeno Music Festival in Italy will be presented for the 11th consecutive year, and will also feature in a special concert at London’s Wigmore Hall on May 31. Special events include collaborations with authors Julian Barnes and Ian McEwan, as well as actor Roger Allam.

You should also see a new version of this website before too long…..and maybe even an App!