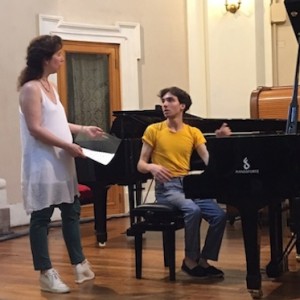 I had better write something before another season starts! Plus I have just learned how to insert material myself on this new website (there simply wasn’t time during the past year to meet with my new web designer…I’ve been so busy), so I’m eager to try it out. What to say? Since I wrote from Hong Kong airport at the end of March, I haven’t stopped. The tour in the Far East with the Academy of St Martin in the Fields and Sir Neville Marriner (age 92!) was huge fun and very rewarding musically. He is simply amazing. Conducting the Toronto Symphony from the keyboard in two Bach Concertos was also something special, since they don’t do that music very often. In June I played five of those concertos in one concert with the Zurich Chamber Orchestra who I found to be wonderful partners, well-trained by their former music director, Sir Roger Norrington. I learned a new Haydn/Schubert programme which was a huge amount of work but well worth the effort–especially the A minor Sonata, Op. 143.

In May I went to Ankara, staying with the Canadian Ambassador and his wife and performing for the Ankara Piano Festival. After the concert, we returned to the residence in a bullet-proof armoured vehicle. During those days, Ankara seemed absolutely fine and I met many wonderful people. Now things are sadly different. The biggest work-load of the year is always for the Trasimeno Music Festival in Umbria, which took place from 30 June to 6 July. Counting the concerts in Milan preceding the festival with “LaVerdi” Orchestra, I gave 10 concerts in 10 days with 7 different programmes–along with running the event with my small staff. Everyone was terrific–they, the artists, the audience who came from around the world….an immense amount of energy but ultimately worth it. Next year’s festival will be from June 28 to July 4, 2017. Put it in your calendar now!

With only one day off after the festival, I started a 5-day masterclass in Perugia (photo), teaching 8 students of all nationalities. They were hugely talented, and we enjoyed our time together. After 3 festival recitals in the UK, it was up to Finland to perform in the Meidan Festival of which the artistic director is violinist Pekka Kuusisto. It’s always worth spending time with him as he is such an original and marvellous musician. I was serenaded on July 26th by the musicians singing Happy Birthday in Finnish!