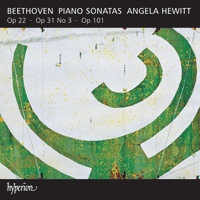 Angela Hewitt presents a fourth volume in her acclaimed series of Beethoven’s piano sonatas, which has delighted her fans worldwide.

“Not since the great Hans Richter-Haaser has a pianist produced Beethoven playing of such trance-like purity and vision.” (Julian Haylock Sinfinimusic.com)

The little-known Sonata in B flat major, Op 22, the last of Beethoven’s ‘early’ sonatas, is recorded alongside Op 31 No 3 (sometimes known as ‘La chasse’, or ‘The Hunt’, because of its tumultuous Presto con fuoco finale). The album is concluded with Op 101, of which the journalist for the Allgemeine musikalische Zeitung in Leipzig wrote: ‘Truly, here in his 101st composition admiration and renewed respect take hold of us, when we wander along strange, never trodden paths with the great painter of the soul’, going on to enthuse about the most beautiful colours and pictures in Beethoven’s new Piano Sonata.

“… Hewitt’s uncluttered clarity of thought and inspired structural pacing pay even greater dividends in the glorious A major Sonata Op.101 (No.28). Hewitt captures its mood of glowing contentment to perfection, climaxing in a fugally inflected finale of exultant profundity. Hewitt’s approach recaptures the sense of wonderment experienced by the composer’s contemporaries…” (Julian Haylock Sinfinimusic.com)

“… the Canadian pianist Angela Hewitt has focused on Beethoven in recent years. This disc, her fourth Beethoven release on the Hyperion label, opens with an elegant interpretation of the infrequently performed Sonata No. 11 (Op. 22), paired with a searching performance of the Sonata No. 18 (Op. 31, No. 3). The disc also includes a powerfully rendered Sonata No. 28 (Op. 101).” (The New York Times)

“Keeping track of all the Beethoven Sonata cycles from classical pianists may be difficult in some cases but certainly not the one being traversed by the great Beethoven pianist Angela Hewitt, one of the greatest ones in process. It isn’t just the performance level which is stratospherically high, it’s the notes by Hewitt herself that makes these Hewitt Beethoven Sonata performances so precious… Few greater ongoing ways exist to encounter Beethoven’s piano world than Hewitt’s series.” (The Buffalo News)