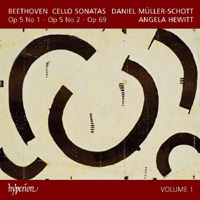 Angela Hewitt is joined by the outstanding German cellist, Daniel Müller-Schott, for her first chamber music CD for Hyperion. Beethoven’s Sonatas for piano and cello are works brimming with life, with the instruments engaging in colourful dialogue. This disc contains the first three sonatas, including the one in A major, Op. 69, written when Beethoven was at the peak of his powers.

Angela Hewitt has taken time out from her impossibly busy solo concert schedule (including her stunningly successful Bach World Tour) to record a dazzling chamber disc with one of the greatest young cellists of today. Daniel Müller-Schott’s rise to fame has been well documented in the world’s press. His fastidious, clean-lined, yet energetic playing is the perfect foil for Angela’s particular artistry.

In their first Hyperion CD together, they present Volume 1 of Beethoven’s complete cello sonatas. Beethoven’s first three cello sonatas astonished his contemporaries with their dramatically innovative qualities. Before he wrote them, there were virtually no works in which the cello fully broke away from its subservient role of basso continuo to become an equal partner to the piano. They are works of extraordinary breadth and grandeur. Writing of the Sonata in A major Op 69, the two artists explain that ‘the dialogue between the two instruments reaches perfection, and demands the highest level of communication and expressiveness’. This is surely achieved in this splendid recording.

‘The dynamic duo find overwhelming intensity in this music, in a performance packed with detail and emotional gravitas’ (Classic FM Magazine)

‘The success of this duo partnership is very evident in this first volume of Daniel Müller-Schott and Angela Hewitt’s Beethoven cycle. They respond with imagination and flexibility to Beethoven’s mercurial changes of mood, one moment tender and reflective, then bold and dynamic … A first class release’ (BBC Music Magazine)

‘Here we are then, at the launch of a wonderful musical adventure, with the outstanding and exquisitely soulful young cellist Danel Müller-Schott, partnered by the wondrous Angela Hewitt at her most sparkling, pristine, warm and flawlessly penetrating in very superior accounts of the two opus 5 sonatas and the opus 69 in A Major … A major collaboration’ (Glasgow Herald)

‘The whole recital is characterised by exquisite phrasing, clean lines and, best of all, an expressiveness that borders on the sublime’ (BBC Online)

‘Müller-Schott has a superbly eloquent and deliciously burnished tone, as nicely done as any I have ever heard… Angela Hewitt proves the perfect partner in this music with a sensitive and leading-when-necessary role that makes for a grand coupling. These might be the premiere Beethoven Cello Sonatas recordings when they are completed–this one is that good’ (Audiophile Audition, USA)