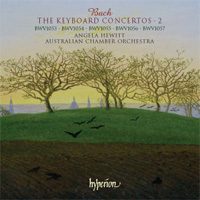 This is the second CD in a set that contains all of Bach’s extant concertos for solo keyboard. Four of the concertos are true solo concertos; the one in F major is Bach’s own arrangement of his Brandenburg Concerto No. 4 featuring two solo flutes as well as solo keyboard.

This is the last CD in Angela Hewitt’s award-winning Bach cycle for Hyperion. She is joined by the dynamic Australian Chamber Orchestra for five keyboard concertos of Bach, including the D major which listeners will recognize as the Concerto in E major for violin and strings. The disc also contains the poignant F minor concerto with its slow movement that Bach recycled in the Cantata aria, “I stand with one foot in the grave.” The recordings of all nine concertos were made within a period of six days in the Verbruggen Hall at the Sydney Conservatorium of Music.

“These two discs, while available separately, go in tandem as a beguiling example of what can be achieved in performances of Baroque music on the piano when they have been prepared with such thought and are blessed with such compelling artistry as Angela Hewitt’s….here she joins the outstanding Australian Chamber Orchestra….(in) interpretations of remarkable synergy and fascinating textures.

The familiar argument that Bach would have written for a piano if only he had had one is nowhere given more persuasive advocacy than in Hewitt’s singing melodic lines, her judicious range of tonal colouring and in her touch, which combines the crispness and full flavour of a fresh apple. Take a bite of any of these concertos, and you will want to make a whole meal of them.” (The Daily Telegraph, London)

Buy this record at Hyperion: http://www.hyperion-records.co.uk/details/67308.asp