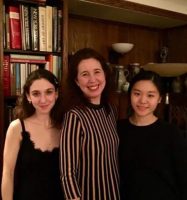 The good news is that I’m much better, and at least now am going out in the street with just one crutch for safety, rather than two. Around the house I don’t need to use them, but mind you, I was just on my feet steadily for almost 6 hours getting ready for yet another trip, and now BOTH feet are killing me! The doctor says the broken foot is healing well, but it will be another few months before I can forget about it. Patience. And yes, physiotherapy which I’m going to see about tomorrow before flying to Germany. Mind you, travelling the world as I do is pretty good physio to start with.

My North American tour in March was a great one. So many wonderful friends helped me along my way, and sustained my morale. As did Bach and his wonderful music. The news that I am to receive the Lifetime Achievement Award in the Governor General’s Performing Arts Awards in Canada at the beginning of June was also a huge boost and an unexpected honour. I am so grateful to be Canadian and to have had such support from my home country throughout my career. Thank you, Canada!

While in New York, I taught a few students as part of a Trasimeno Music Festival fundraiser in a lovely West Side artist’s studio. Here I am with Julia Hamos and Margaret Kim, both of whom I’ve followed ever since they studied with me in Perugia. Don’t forget to book now for the next Trasimeno Music Festival coming up from 29 June to 5 July. Every evening we present a very special programme in places of breathtaking beauty.

Now it’s off to perform five Bach Concertos with the Stuttgart Chamber Orchestra in Munich (conducting from the piano), and the Goldberg Variations the next day—both in the lovely acoustics of the Herkulessaal.