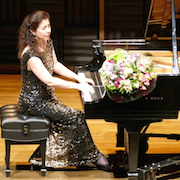 I’ve played some recitals in great places since I last wrote. The first was in the church of St. John’s Downshire Hill as part of the Hampstead Arts Festival in London. It was totally inspiring to perform there, and the acoustics for the Art of Fugue were perfect. What a difference that makes to the overall feel of a performance! Then it was over to the Toronto area where I played a different programme (Bach, Beethoven, Scarlatti, Albeniz, Liszt) for the recital series in Aurora, Ontario. Some musician friends, Bonnie Silver and Norbert Kraft, run that series and welcomed me warmly. Two nights later I played the same thing in the Cleveland Museum of Art – a concert organised by the Cleveland International Piano Competition (see photo). I was a winner in that in 1979 when it was named the Casadesus Piano Competition (and have many fond memories of the event). Another capacity audience in their newly-restored Auditorium which is a great place. Next up is Connecticut–a recital for the Schubert Club on the 22nd. A million things to do in the meantime. The time to announce my Trasimeno Music Festival programme for 2015 is coming soon, and I’m working hard on that. Stay tuned!

My recording of Bach’s Art of Fugue on the Hyperion label is at the top of the UK Specialist Classical Chart for the 6th week in a row! I’m happy for Hyperion–and wish I could tell Bach himself!